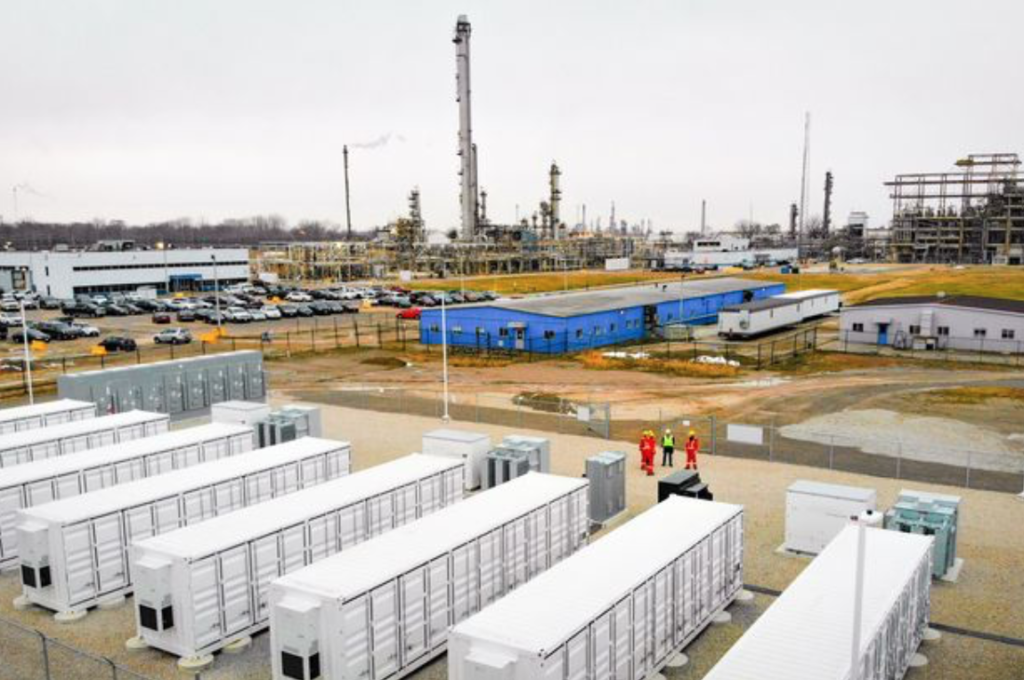 As batteries capable of powering buildings get bigger and cheaper, businesses are increasingly looking to install them to gain more control over their electricity costs.

Unlike large battery arrays being built by utilities to feed power to the grid, these batteries are typically being built on site to cater to the needs of individual users. Installing them locally can help companies manage costs by storing power when it is cheaper to produce or buy, and tapping it when wholesale prices go up or there is a power disruption.

Swiss asset manager Capital Dynamics broke ground last month on a massive battery system that will allow data-center company Switch Inc. to store solar power and manage the cost of electricity it uses to cool a 1.3-million-square-foot data-server center in Nevada. It will provide 60 megawatts of storage capacity for four hours, making it the largest so-called behind-the-meter battery in the world.

The battery system is large enough to help supply the facility with solar energy when the sun isn’t shining, minimizing the company’s reliance on the grid. Switch expects to pay about 5 cents a kilowatt-hour, several cents less than what it would cost to buy power from NV Energy, the local utility owned by Warren Buffett’s Berkshire Hathaway Inc., BRK.B -0.36% saving the company tens of millions of dollars a year.

“The batteries create a whole new level of flexibility for us in how we’re able to manage our energy,” said Adam Kramer, the executive vice president for strategy at Switch. “Our goal is to be running around the clock on green electrons.”

The batteries are part of a $1.3 billion solar-and-storage portfolio Capital Dynamics is building to supply customers in Nevada as prices fall for large-scale solar arrays and lithium-ion batteries. Capital Dynamics anticipates profiting from the project after about 15 years.

“I’m hoping that this project will be a template within the industry,” said Benoit Allehaut, the asset manager’s managing director for clean-energy infrastructure.

Utilities across the U.S. are experimenting with electricity prices based on time of use as more solar power is added to the grid, adding to daytime energy supplies. That presents an opportunity for some businesses to save money by storing power throughout the day, when prices are lower, and using it during the evening, when prices are higher.

Research firm Guidehouse Insights estimates U.S. businesses will deploy 220 megawatts of storage at or near their locations next year, up from 77 megawatts this year.

Commercial and industrial batteries claim a relatively small portion of the overall storage market, where growth has been driven by large-scale utility projects. Utilities are expected to deploy about 3,170 megawatts of battery storage next year, up from 846 megawatts this year. But Guidehouse anticipates the two segments to grow at similar rates in the coming years, with each more than quadrupling in size by 2029.

To date in North America, the largest commercial batteries not owned by utilities exist in Ontario, Canada, where demand charges—extra fees some utilities charge for maintaining constant supplies no matter what—are relatively high for industrial customers.

Convergent Chief Executive Johannes Rittershausen said the company is looking to tap emerging markets in the Northeast and mid-Atlantic as battery prices decline. When the company was founded in 2011, battery systems cost about $2,000 a kilowatt-hour, he said. Now, prices have fallen to roughly $300 a kilowatt-hour.

“That has put in play a lot of customers who obviously didn’t have a value proposition 10 years ago,” Mr. Rittershausen said.

Still, it isn’t possible for businesses in every region to install their own batteries because of regulations. California, New York and Massachusetts were among the first U.S. states to allow commercial and industrial battery storage. More are expected to open up as businesses pursue renewable-energy goals and look to cut down on electricity costs.

Sierra Nevada Brewing Co., which operates breweries in Chico, Calif., and Mills River, N.C., is already seeing returns on a 500-kilowatt battery system it installed in Chico in 2017 to store power from on-site solar arrays and gas microturbines. The company, which requires large amounts of power early in the morning to ramp up operations, for years faced high demand charges from its local utility, PG&E Corp.

Before installing the batteries, the company’s monthly demand charges could at times exceed $50,000. Now, it is able to keep them under $10,000 a month by discharging power from the batteries when its needs exceed its ability to generate electricity on site.

Mandi McKay, Sierra Nevada’s sustainability manager, said the system is paying itself off quickly. “We’re talking hundreds of thousands of dollars in savings,” she said.